Translational genetics: CRISPR therapies — making the grade not the cut

The aim of the study was to test for significant differences in non-invasively estimated muscle oxygen uptake ( \(\dot {V}_{2{\text{musc}}}}\) ) kinetics, assessed by a square-wave exercise protocol (STEP) as well as by a time series approach with pseudorandom binary sequence (PRBS) work rate (WR) changes.

Publication date: February 2018
Source:Journal of Environmental Radioactivity, Volume 182
Author(s): S. Chakraverty, B.K. Sahoo, T.D. Rao, P. Karunakar, B.K. Sapra
Modelling radon transport in the earth crust is a useful tool to investigate the changes in the geo-physical processes prior to earthquake event. Radon transport is modeled generally through the deterministic advection-diffusion equation. However, in order to determine the magnitudes of parameters governing these processes from experimental measurements, it is necessary to investigate the role of uncertainties in these parameters. Present paper investigates this aspect by combining the concept of interval uncertainties in transport parameters such as soil diffusivity, advection velocity etc, occurring in the radon transport equation as applied to soil matrix. The predictions made with interval arithmetic have been compared and discussed with the results of classical deterministic model. The practical applicability of the model is demonstrated through a case study involving radon flux measurements at the soil surface with an accumulator deployed in steady-state mode. It is possible to detect the presence of very low levels of advection processes by applying uncertainty bounds on the variations in the observed concentration data in the accumulator. The results are further discussed. 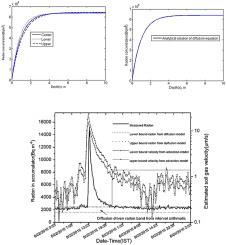 Publication date: Available online 17 December 2017
Source:International Journal of Psychophysiology
Author(s): Motohiro Kimura, Yuji Takeda
When humans frequently experience a certain sensory effect after a certain action, a bidirectional association between neural representations of the action and the sensory effect is rapidly acquired, which enables action-driven prediction of the sensory effect. The present study aimed to test whether or not omission P3, an event-related brain potential (ERP) elicited by the sudden omission of a sensory effect, is sensitive to the formation of action-driven prediction. For this purpose, we examined how omission P3 is affected by the number of possible visual effects. In four separate blocks (1-, 2-, 4-, and 8-stimulus blocks), participants successively pressed a right button at an interval of about 1s. In all blocks, each button press triggered a bar on a display (a bar with square edges, 85%; a bar with round edges, 5%), but occasionally did not (sudden omission of a visual effect, 10%). Participants were required to press a left button when a bar with round edges appeared. In the 1-stimulus block, the orientation of the bar was fixed throughout the block; in the 2-, 4-, and 8-stimulus blocks, the orientation was randomly varied among two, four, and eight possibilities, respectively. Omission P3 in the 1-stimulus block was greater than those in the 2-, 4-, and 8-stimulus blocks; there were no significant differences among the 2-, 4-, and 8-stimulus blocks. This binary pattern nicely fits the limitation in the acquisition of action-effect association; although an association between an action and one visual effect is easily acquired, associations between an action and two or more visual effects cannot be acquired concurrently. Taken together, the present results suggest that omission P3 is highly sensitive to the formation of action-driven prediction.

Reasons for Distress Among Burn Survivors at 6, 12 and 24 Months Post-Discharge: A Burn Injury Model System Investigation

Publication date: Available online 16 December 2017
Source:Archives of Physical Medicine and Rehabilitation
Author(s): S.A. Wiechman, K. McMullen, G.J. Carrougher, J.A. Fauerbach, C. Ryan, D.N. Herndon, R. Holavanahalli, N.S. Gibran, K. Roaten
ObjectiveTo identify important sources of distress among burn survivors at discharge and at 6, 12 and 24 months post injury, and to examine if the distress related to these sources changed over time. Design: Exploratory. Setting: Outpatient burn clinics in 4 sites across the country. Participants: A total of 1009 participants who met pre-stablished criteria for having a major burn injury were enrolled in this multisite study. Interventions: Participants were given a previously developed list of 12 sources of distress among burn survivors, and asked to rate on a 10-point, Likert-type scale (0 = no distress to 10 = high distress) how much distress each of the 12 issues was causing them at the time of each follow-up. Main Outcomes: The SF-12® Health Survey was administered at each time point as a measure of health-related quality of life. The Satisfaction With Appearance Scale (SWAP) was used to understand the relationship between sources of distress and body image. Finally, whether a person returned to work was used to determine the impact of sources of distress on returning to employment. Results: It was encouraging that no symptoms were worsening at 2 years. However, financial concerns and long recovery time are two of the highest means at all time points. Pain and sleep disturbance had the biggest impact on ability to return to work. Conclusions: . These findings can be used to inform burn-specific interventions and to give survivors an understanding of the temporal trajectory for various causes of distress. In particular, it appears that interventions targeted at sleep disturbance and high pain levels can potentially impact distress over financial concerns by allowing a person to return to work more quickly.

Multiparametric MR imaging of the Prostate

Multiparametric MR imaging is widely embraced for the diagnosis, staging, and surveillance of prostate cancer. However, normal anatomic structures and many benign entities have overlapping imaging features with prostate cancer. Although some of these entities require biopsy and histopathologic diagnosis, some have characteristic imaging features that are suggestive of their diagnosis. Knowledge of these pitfalls is important in establishing a correct diagnosis and avoiding unnecessary biopsies, as these entities are encountered routinely in clinical practice.