RASopathies comprise several genetic syndromes with mainly cardio–facial–cutaneous manifestations. We report a patient with Noonan syndrome with multiple lentigines (NSML) due to a PTPN11 (p.Thr468Met) mutation associated with hypertrophic neuropathy of lumbar plexus in an adult woman, initially referred for neuropathic pain. Differential diagnosis of neurofibromatosis type 1 (NF1) and other RASopathies is difficult without molecular testing. © 2016 Wiley Periodicals, Inc. 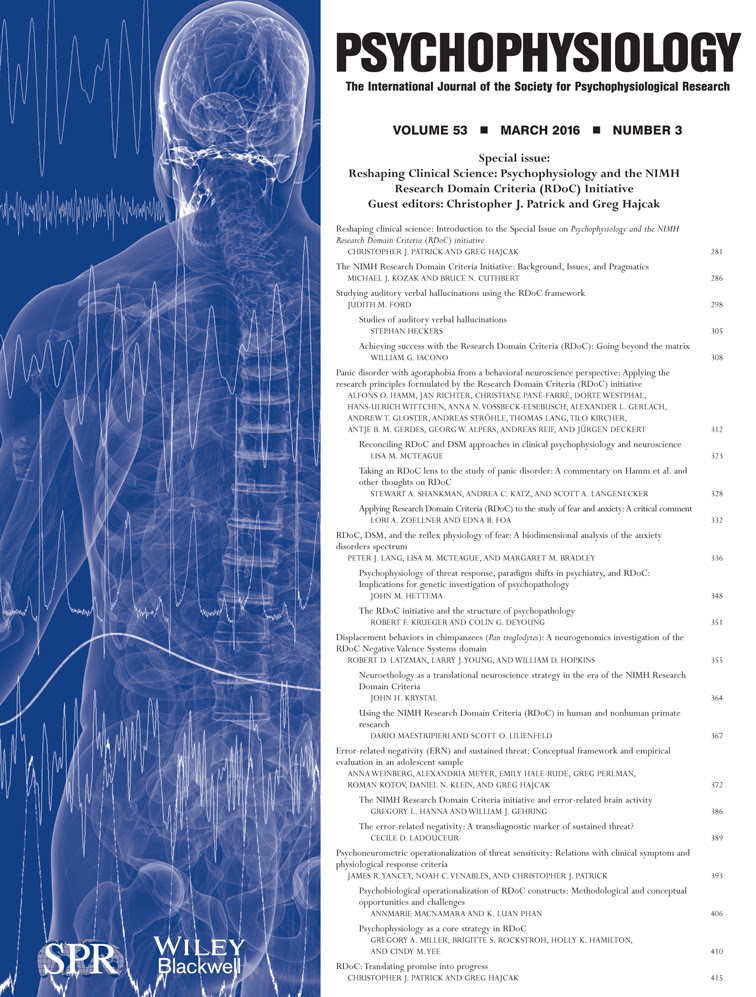 Across species, cued fear conditioning is a common experimental paradigm to investigate aversive Pavlovian learning. While fear-conditioned stimuli (CS+) elicit overt behavior in many mammals, this is not the case in humans. Typically, autonomic nervous system activity is used to quantify fear memory in humans, measured by skin conductance responses (SCR). Here, we investigate whether heart period responses (HPR) evoked by the CS, often observed in humans and small mammals, are suitable to complement SCR as an index of fear memory in humans. We analyze four datasets involving delay and trace conditioning, in which heart beats are identified via electrocardiogram or pulse oximetry, to show that fear-conditioned heart rate deceleration (bradycardia) is elicited and robustly distinguishes CS+ from CS−. We then develop a psychophysiological model (PsPM) of fear-conditioned HPR. This PsPM is inverted to yield estimates of autonomic input into the heart. We show that the sensitivity to distinguish CS+ and CS− (predictive validity) is higher for model-based estimates than peak-scoring analysis, and compare this with SCR. Our work provides a novel tool to investigate fear memory in humans that allows direct comparison between species.

Selectivity of conditioned fear of touch is modulated by somatosensory precision

Learning to initiate defenses in response to specific signals of danger is adaptive. Some chronic pain conditions, however, are characterized by widespread anxiety, avoidance, and pain consistent with a loss of defensive response specificity. Response specificity depends on ability to discriminate between safe and threatening stimuli; therefore, specificity might depend on sensory precision. This would help explain the high prevalence of chronic pain in body areas of low tactile acuity, such as the lower back, and clarify why improving sensory precision may reduce chronic pain. We compared the acquisition and generalization of fear of pain-associated vibrotactile stimuli delivered to either the hand (high tactile acuity) or the back (low tactile acuity). During acquisition, tactile stimulation at one location (CS+) predicted the noxious electrocutaneous stimulation (US), while tactile stimulation at another location (CS−) did not. Responses to three stimuli with decreasing spatial proximity to the CS+ (generalizing stimuli; GS1–3) were tested. Differential learning and generalization were compared between groups. The main outcome of fear-potentiated startle responses showed differential learning only in the hand group. Self-reported fear and expectancy confirmed differential learning and limited generalization in the hand group, and suggested undifferentiated fear and expectancy in the back group. Differences in generalization could not be inferred from the startle data. Specificity of fear responses appears to be affected by somatosensory precision. This has implications for our understanding of the role of sensory imprecision in the development of chronic pain.

2016-03-07T02-20-22Z
Source: International Journal of Advances in Medicine
Brijesh Kumar, Mukesh Rana.
Background: Acute rheumatic fever (ARF) remains one of the major causes of cardiovascular disease burden throughout the world particularly among the young. Availability of echocardiography / Doppler adds a different angle to the diagnosis of ARF and RHD in India. Methods: The present one year cross-sectional study was conducted on patients of rheumatic fever (RF) and rheumatic heart disease (RHD) of age group of 5-15 years from in and around Kanpur, India to test the validity of Jones criteria. Results: Out of 950 patients, majority had arthralgia (85%) and fever (82%). Nearly 23% had arthritis, 67% patients had an increased PR interval in ECG and increased ASO titre was seen in 93% of patients. Only1% was having subcutaneous nodules, 2% had Erythema marginatum and no patient had chorea while 24 % had a positive throat swab culture. Conclusions: Jones criteria can be made more simple and easy to apply. The two diagnostic features of RF and RHD were arthritis/arthralgia and carditis. The other major as well as minor criteria had no importance for diagnosis of new cases.

2016-03-07T01-15-08Z
Source: International Journal of Basic & Clinical Pharmacology
Renuka H. Munshi, Kanchan R. Singh, Astha D. Thakkar.
Background: Pharmaceutical marketing activities are regarded as ethically challenging by most medical professionals. This study was planned to understand the extent of the interaction of pharmaceutical companies with healthcare providers & to determine the level of awareness about the Medical Council of India (MCI) Code of Ethics. Methods: A questionnaire based survey was conducted among 100 consultants and residents. The questionnaire mainly dealt with ethical issues about accepting free gifts, medicines and other sponsorships from pharmaceutical representatives, interactions and expectations from representatives of pharmaceutical companies by doctors and ascertaining among them the level of awareness about the MCIs code of ethics. Results: 59.4% residents and 58.8% consultants do not consider small gifts (stationery/books/drug samples) as ethically problematic. 88% residents and 85% consultants felt that offers should be limited. 72% of consultants were aware of the revised MCI code of ethics as compared to 28% of residents. Conclusions: Most physicians do maintain a code of ethics with regards to accepting gifts and they felt that inexpensive gifts do not influence clinical judgment. Consultants were of the view that amended MCI code of ethics would not affect their clinical practice significantly.

Extra-hepatic manifestations of hepatitis C — a meta-analysis of prevalence, quality of life, and economic burden

Surgeon volume and cancer esophagectomy, gastrectomy, and pancreatectomy: A population-based study in England

Sorafenib with or without everolimus in patients with advanced hepatocellular carcinoma (HCC): A randomized multicenter, multinational phase II trial

Sofosbuvir-containing regimen for HCV infection in hemodialysis patients: 400 mg daily or only on the day of hemodialysis

Effect of hospital volume on surgical outcomes after pancreaticoduodenectomy: a systematic review and meta-analysis

Taiwanese Journal of Obstetrics and Gynecology

Journal of Gastroenterology and Hepatology

Journal of the Formosan Medical Association