The purpose of this study was to investigate whether high-intensity cycling training leads to adapted responses of balance performance in response to exercise-induced muscle fatigue.

In summary, 3 weeks of HIT resulted in longer recovery times following fatigue compared to pre-training assessments. After 6 weeks of HIT, postural sway following fatigue was attenuated. These results indicate that HIT could be included in injury prevention programmes, however, caution should be taken during early stages of the overreaching process.

Publication date: November 2016
Source:Journal of Environmental Radioactivity, Volume 164
Author(s): Angel T. Bautista, Hiroyuki Matsuzaki, Fernando P. Siringan
Iodine-129 is a long-lived fission product that is majorly released in human nuclear activities (HNA) such as nuclear bomb testing, nuclear fuel reprocessing, and nuclear accidents. It is a good environmental tracer and former measurements of 129I in corals from the southern hemisphere show the increasing trend of 129I concentrations in the marine environment caused by HNA. Here we show time series of 129I/127(stable)I isotopic ratios in two coral cores from the northern hemisphere (Philippines) and how these record 129I released from HNA in even greater, unprecedented detail. Corals were taken from the Pacific Ocean (Baler) and South China Sea (Parola) sides of the Philippines. We observed nearly identical peaks (129I/127I ∼ 31.5 × 10−12) in both the Baler and Parola records, each attributed to the year 1962 – the year with the highest recorded amount of 129I release from nuclear bomb testing. This 1962 129I bomb signal offers a new time marker that can be used to establish or confirm age models of corals, comparable to or possibly better than the well-known coral 14C bomb peak. We also observed nuclear fuel reprocessing and Chernobyl accident 129I signals in years 1977, 1980, and 1986, concurrently in Parola and with 9 to 11-year lags in Baler. This discrepancy in timing suggests that 129I was transported to the South China Sea and Pacific Ocean sides of the Philippines directly from the atmosphere and through prevailing ocean currents, respectively. Lastly, we observed surprisingly high 129I/127I isotopic ratios (i.e., 22.8 to 38.9 × 10−12) in the Parola record after the year 1996, which is in contrast to the decreasing trend observed in the Baler record and in published 129I releases of different HNA. These results possibly indicate the presence of unknown sources of 129I in the South China Sea region. 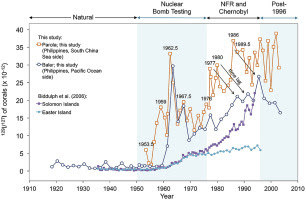 Publication date: November 2016
Source:Journal of Environmental Radioactivity, Volume 164
Author(s): Pallavi Khandare, Manish Joshi, Arshad Khan, B.K. Sapra, Y.S. Mayya
This paper presents an experimental approach to evaluate the effectiveness of unipolar ionizers in indoor environment for the removal of thoron (220Rn) daughter products. Both continuous and instantaneous source conditions were simulated during these experiments. Activity and aerosol related parameters were measured for these experiments and results were interpreted. Activity concentration was found to be reduced by a factor 6.6 and 34 for continuous and instantaneous source conditions, respectively. The particle size dependency of mitigation of particles using ionizer is also discussed. The effect of ionizer on activity size distribution has been directly measured for the first time. The ionizer induced changes in particle size distributions were coupled to Dose Reduction Factor (DRF) model and significant DRF values were obtained for both source conditions. This study discusses open issues which are important for establishing ionizer induced radioactivity mitigation as a technology application.

Does nitrous oxide labor analgesia influence the pattern of neuraxial analgesia usage? An impact study at an academic medical center

To compare the rate of epidural use before and after the implementation of nitrous oxide (N2O).

Several authors have reported rare, but severe, complications associated with the length of the intravascular guidewire during central venous catheter placement, as the wire tip can cause cardiac arrhythmia or perforation or become trapped within the vessel. Although one report investigated the optimal guidewire length using fluoroscopy, few reports have precisely measured guidewire position using transesophageal echocardiography (TEE). Here, we investigated the appropriate intravascular length of a guidewire for right internal jugular vein approach using TEE during cardiac surgery.

Biologic therapies and risk of infection and malignancy in patients with inflammatory bowel disease: A systematic review and network meta-analysis

Effectiveness of surveillance for hepatocellular carcinoma in clinical practice: A United States cohort

The Journal of Infectious Diseases

Emergency Manual Uses During Actual Critical Events and Changes in Safety Culture From the Perspective of Anesthesia Residents: A Pilot Study.

BACKGROUND: Emergency manuals (EMs), context-relevant sets of cognitive aids or crisis checklists, have been used in high-hazard industries for decades, although this is a nascent field in health care. In the fall of 2012, Stanford clinically implemented EMs, including hanging physical copies in all Stanford operating rooms (ORs) and training OR clinicians on the use of, and rationale for, EMs. Although simulation studies have shown the effectiveness of EMs and similar tools when used by OR teams during crises, there are little data on clinical implementations and uses. In a subset of clinical users (ie, anesthesia residents), the objectives of this pilot study were to (1) assess perspectives on local OR safety culture regarding cognitive aid use before and after a systematic clinical implementation of EMs, although in the context of long-standing resident simulation trainings; and (2) to describe early clinical uses of EMs during critical events. METHODS: Surveys collecting both quantitative and qualitative data were used to assess clinical adoption of EMs in the OR. A pre-implementation survey was e-mailed to Stanford anesthesia residents in mid-2011, followed by a post-implementation survey to a new cohort of residents in early 2014. The post-implementation survey included pre-implementation survey questions for exploratory comparison and additional questions for mixed-methods descriptive analyses regarding EM implementation, training, and clinical use during critical events since implementation. RESULTS: Response rates were similar for the pre- and post-implementation surveys, 52% and 57%, respectively. Comparing post- versus pre-implementation surveys in this pilot study, more residents: agreed or strongly agreed "the culture in the ORs where I work supports consulting a cognitive aid when appropriate" (73.8%, n = 31 vs 52.9%, n = 18, P = .0017) and chose more types of anesthesia professionals that "should use cognitive aids in some way," including fully trained anesthesiologists (z = -2.151, P = .0315). Fifteen months after clinical implementation of EMs, 19 respondents (45%) had used an EM during an actual critical event and 15 (78.9% of these) agreed or strongly agreed "the EM helped the team deliver better care to the patient" during that event, with the rest neutral. We present qualitative data for 16 of the 19 EM clinical use reports from free-text responses within the following domains: (1) triggering EM use, (2) reader role, (3) diagnosis and treatment, (4) patient care impact, and (5) barriers to EM use. CONCLUSIONS: Since Stanford's clinical implementation of EMs in 2012, many residents' self-report successful use of EMs during clinical critical events. Although these reports all come from a pilot study at a single institution, they serve as an early proof of concept for feasibility of clinical EM implementation and use. Larger, mixed-methods studies will be needed to better understand emerging facilitators and barriers and to determine generalizability. (C) 2016 International Anesthesia Research Society

Impact of an Analgesia-Based Sedation Protocol on Mechanically Ventilated Patients in a Medical Intensive Care Unit.

BACKGROUND: Recent attention to adverse effects of intensive care unit (ICU) sedation has led to the use of strategies that target a "lighter" depth of sedation. Among these strategies are "analgosedation" protocols, which prioritize pain management and preferentially use IV opioids before administration of continuously infused sedatives such as propofol or midazolam. We hypothesized that using an analgosedation protocol would result in a shorter duration of mechanical ventilation than a protocol with greater emphasis on IV sedatives METHODS: We conducted a retrospective study comparing the duration of mechanical ventilation before and after implementation of an analgosedation protocol in a 24-bed medical ICU. Patients were aged 18 years or older and required mechanical ventilation where a light level of sedation was clinically appropriate. Exclusion criteria included a clinical need for deeper levels of sedation or tracheal intubation confined to the perioperative period. RESULTS: Seventy-nine patients were included in the postimplementation group and 65 in the preimplementation group. After adjustment for baseline covariates, introduction of the 2013 analgosedation protocol was associated with a decreased duration of mechanical ventilation (-26.62 hours; 95% confidence interval, - 44.98 to -8.26, P = 0.005). Patients managed with the analgosedation protocol experienced a lighter level of sedation (median Richmond Agitation-Sedation Scale, -2.57 vs -1.25, P = 0.001) and improved pain management (median Critical-Care Pain Observation Tool score, 2.0 vs 1.5, P = 0.03). The use of continuously infused sedatives was reduced by 54.3% (92.3% vs 38.0%, P

BACKGROUND: Within the context of automating neonatal oxygen therapy, this article describes the transformation of an idea verified by a computer model into a device actuated by a computer model. Computer modeling of an entire neonatal oxygen therapy system can facilitate the development of closed-loop control algorithms by providing a verification platform and speeding up algorithm development. METHODS: In this article, we present a method of mathematically modeling the system's components: the oxygen transport within the patient, the oxygen blender, the controller, and the pulse oximeter. Furthermore, within the constraints of engineering a product, an idealized model of the neonatal oxygen transport component may be integrated effectively into the control algorithm of a device, referred to as the adaptive model. Manual and closed-loop oxygen therapy performance were defined in this article by 3 criteria in the following order of importance: percent duration of SpO2 spent in normoxemia (target SpO2 +/- 2.5%), hypoxemia (less than normoxemia), and hyperoxemia (more than normoxemia); number of 60-second periods 95% SpO2; and number of manual adjustments. RESULTS: Results from a clinical evaluation that compared the performance of 3 closed-loop control algorithms (state machine, proportional-integral-differential, and adaptive model) with manual oxygen therapy on 7 low-birth-weight ventilated preterm babies, are presented. Compared with manual therapy, all closed-loop control algorithms significantly increased the patients' duration in normoxemia and reduced hyperoxemia (P

BACKGROUND: Bispectral Index Scale (BIS)-guided closed-loop delivery of anesthetics has been extensively studied. We performed a meta-analysis of all the randomized clinical trials comparing efficacy and performance between BIS-guided closed-loop delivery and manually controlled administration of total IV anesthesia. METHODS: Scopus, PubMed, EMBASE, and the Cochrane Central Register of clinical trials were searched for pertinent studies. Inclusion criteria were random allocation to treatment and closed-loop delivery systems versus manually controlled administration of total IV anesthesia in any surgical setting. Exclusion criteria were duplicate publications and nonadult studies. RESULTS: Twelve studies were included, randomly allocating 1284 patients. Use of closed-loop anesthetic delivery systems was associated with a significant reduction in the dose of propofol administered for induction of anesthesia (mean difference [MD] = 0.37 [0.17-0.57], P for effect